Just one of those days...

I know everybody's had one of "those games" the ones that just frustrate and irritate you from the get go, well today was it for me.

So obviously first game of the tournament: 1000 points, custom mission with spearhead deployment.  We were randomly paired with our opponents, dice rolls determined who went against who.  I get paired up against Orks...ok no problem with my list being able to take out the kind of numbers I knew I was going to face.  I've pretty much got as good an anti-horde force as I'm going to get playing Deathwing at 1000 points.
So then we get to pulling out our armies and setting everything up.  Obviously it doesn't take me long to get everything I need out, here's my list:
HQ:
Belial-Thunder Hammer, Storm Shield
Troops:
Terminator Command squad: Apoth, 2x Lightning Claws 3x TH/SS, Cyclone
Terminator Squad: Storm bolters, Cyclone,Chainfist x2
Fast Attack:
Ravenwing Attack Squad: Meltagun x2, Attack Bike w/MM
Elites:
Venerable Dreadnought: Plasma Cannon, Extra armor, Heavy flamer
I'm waiting for my opponent to get everything together, not really surprised that it's taking a lot longer.  Thats when he looks at me and informs me that he forgot essentially half of his army at home...
Now I can be forgetful, but this is a 40k Tourney, not a pickup game.  Two things you should make sure you have are an already made up list, and your complete army on that list.  If he forgot dice, templates, or a measuring tape I would've gladly just let him use mine but there's not much I can do when you're missing 2 Trukks a looted wagon and a bunch of meganobs.
He asks if I mind if he goes home to get them, he doesn't live far away.  "Sure, no problem" I say...I mean what's a few minutes really?  I'm an easy going guy and it's not that big a deal.  I bide my time by watching the other games while he's gone, only to realize after a while that guys are getting into the bottom of turn 3 and my opponent is still MIA....
Now I'm starting to get irritated.
My opponent finally shows up, and deploys his forces.  I'm going with my now standard null deployment, so everything can outflank or deepstrike, barring the Dread.  At this point I'll just cut to the chase....I've never rolled so many 1's in any sort of game in my life!  I'm not the kind of guy who looks to blame his dice when things are going bad, but when his Gretchin mob (and it was only 10 grots strong so I can't even say he was saturating me with fire) is sniping Deathwing Terminators like they're actually good shots, something is seriously wrong.  I've got quite a few templates to drop on him, but I'm taking out like a total of 2 or 3 models in a shooting phase, and not because of scatter...my rolls to wound all flop.

I end the game with a single Terminator still on the board, everything else got decimated.  I have no chance at placing at this tourney anymore, next week I'm going to have to take a pass because I have real life stuff to do.  That means I only have the 2000, 2500 and 3000 point games to try and make up some points, which just isn't going to happen since the higher scoring players are going to have around 50 points the next time I play and I'm only going to have 5 from this game....I need to do some work on my 2k list, make it harder.
Posted by The Epistolary at 7:39 PM No comments:

Alright so next weekend the Tourney starts, and while I was down at the shop I took a look at the list of people signed up so far.  Talking to Dean he's pretty sure a lot of people are just gonna show up game day without putting their names on the list, so I got to take this with a grain of salt but at least it gives me some insight into what I'm going to face.  Here's the list so far:

Chaos (deamons of space marines I don't know)
Dark Angels (me, of course)

Tau or Sisters of Battle- Played this guy today, same guy I tied against at 1k.  The possibility of a WD update to the Sisters during the course of this tourney has him leaning that way, but we'll see.

I'm going to have to assume that the two guys who put down Space Marines are talking about Codex marines, and not trying to sneak some Space Wolves or Blood Angels in there.  So what can I expect to face against this kind of lineup?

Having played against the Tau player at both 2k and 1k I  know that if he decides to go for the Tau instead of Sisters my default lists are more than a match for his, and it's really going to be a matter of who's tactics are better (He's got a serious advantage here).  Or maybe my insane luck with saving throws against him...either or....

If I were one of the two Dark Eldar players I'd be looking at these lists and expecting lots of mech and tooling up my lists accordingly. Beetween the three space marine armies, imperial guard, and Tau you can usually count on quite a few tanks and transports for your lance weapons to take out as a DE player.  So assuming the DE are both tooled up to take out mech,  I know my default lists are going to frustrate them with a lack of things to shoot at.

The IG and Marine players I pretty much touched on with the DE, I'm going to assume a high amount of mech for these guys which I feel I've got covered pretty well at all point levels.  If they end up throwing a lot of infantry at me instead, I've got the right stuff to take out the masses as well.  Well I think I do at least lol.  I'm fairly confident in my lists right now, it's my skill at applying them properly where I'm worried.  I got two practice games in, but that's all I'm gonna get before the tourney starts.  Oh well, I kinda like the idea of just throwing myself out there and giving it all I got.
Posted by The Epistolary at 6:23 PM No comments:

I'm not dead! (And a half assed batrep vs Tau) 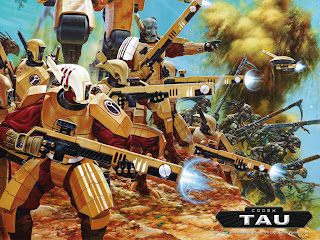 So yeah sorry for the delay in the blog, life gets in the way like that it seems.  Anyway.....played my first game of 40K today!  That was a good feeling, finally playing after putting so much time into painting.  On top of that I got a draw, which is more than I was expecting for my first game for sure.  I wish I had a full batrep for you guys, but I forgot to write anything down during the game and almost immediately afterwards I got a service call I had to go on, so the details kinda left my head while I was working.  We played 1000 pts, my list was this:

Of course now that I'm writing this, I realize that I screwed up and put two attack bikes on the table, which put me over by 50 points...and honestly without that second attack bike I'm not so sure that I would've pulled off the draw.  Well that sure puts a damper on the whole thing....

*Sigh* Well I suppose I'll continue with this post though that realization sure took the wind out of my sails.  I did a null deployment so that my bikes could outflank, and my Terminators would deepstrike.  My biggest mistake was Deathwing Assaulting my stormbolter squad, which put them on the table by themselves with an entire tau army firing at them.  I will say that it really did take the entire army to take out that one squad though....I made saves like you wouldn't believe.  I also forgot that the banner gave an extra attack to my command squad, though that really didn't have much impact on the outcome.  If a squad of melee terminators assaults anything Tau, they pretty much win automatically.

All in all I think I learned a lot in my first game, I'd go into more detail but between not being able to remember it well enough and the whole extra attack bike thing I think I'll just end it here.  I'll be at Clockwork Comics every Sunday for the foreseeable future, practicing.  I'm signed up for a tournament that starts the 19th at 1000 points and escalates every Sunday after that until we get to 3000 points...which means I'll be buying some Landraiders, which I'm kinda looking forward to working on.  Not sure if I'm going to go with two Crusaders or one Crusader and one Godhammer....I've got time to think on that though
Posted by The Epistolary at 8:34 PM No comments: